To the BME community of the University of Birmingham,

Regarding the recent situation with the (now ex) President of the University of Birmingham Christian Union (UBCU), we would like to inform you that this now been resolved.

After calls from BEMA, the Ethnic Minority Students Officer, the Guild of Students, the National Union of Students, and from members of the public, the President of UBCU tendered his resignation on Wednesday night (October 10th).

A written public apology from the ex-President is due to be published in the next issue of the Redbrick Newspaper this Friday (October 12th).

After going through what we deem fair and lenient procedures, BEMA is pleased that a positive outcome has been reached.

We believe that racism in society should never be tolerated and that full responsibility should be taken when acts of ignorance are committed.

We would also like to thank all of the students that came to our open discussion on Monday evening (October 8th) to share their views on the issue and support for our stance.

Our official statement is also due to be posted in Redbrick and reads as follows:

‘We accept Ben’s apology, as we see he has taken responsibility for his actions and is willing to educate himself on liberation issues and white privilege. We have always said publicly, that Ben’s act does not make him a racist, as we understand he was ignorant towards the “Blacking up” issue. We are satisfied that we can move forward from this with a better informed student population, and that zero-tolerance will be taken more seriously at our university. We would like to take this opportunity to thank Ben for his apology.’

Also, a quick reminder that our next event for Black History Month 2012 will be on Tuesday, October 16th.  It is a screening of the film ‘Life and Debt’ and there will also be a talk by renowned scholar Cecil Gutzmore.  It shall be held in Arts Lecture Room 7 from 6pm-9pm.  The event is free and will be catered by local Caribbean restaurant Connie’s Cultural Cuisine, so we can plan numbers, please RSVP to bema@guild.bham.ac.uk .

Hope you are all well,

As one of the, many, unfortunate England football fans, I, along with millions of others, agonisingly watched Hodgson’s team get knocked out of Euro 2012 last night, on penalties.  On seeing Ashley Young rattle the crossbar with his attempt, and seeing Ashley Cole’s feeble shot saved by Buffon; my initial thoughts were of despair for the team and sympathy for the two players.  This, however, was not the case for a number of other England fans.

In the midst of the football-related trends on Twitter, were numerous posts attributing England’s defeat to ethnicity and skin colour.  During a tournament that has been marred with accusations of racism from the Polish and Ukrainian football fans as highlighted in BBC Panorama’s documentary ‘Euro 2012: Stadiums of Hate’, these tweets have shown that racism is still a very real, and equally unnerving issue here in Britain too.  Such tweets referred to Young and Cole as ‘niggers’ and ‘monkeys’ along with claims that ‘England doesn’t need black penalty takers’. 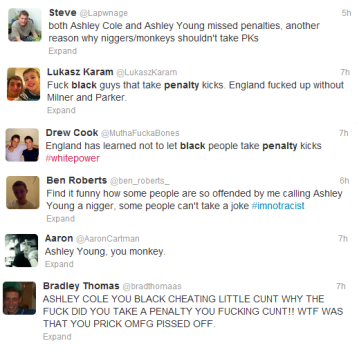 It will be interesting to see if the media shine as much of a light on it, but I’m doubtful that they will.  It certainly reinforces the idea that FIFA’s anti-racism campaign is still nothing more than just a slogan of ‘Unite Against Racism’ or ‘Let’s Kick Racism Out Of Football’.  Some of these issues are rooted deep in areas of society, and FIFA and the English Football Association have got lots of room for improvement in stepping up these campaigns.

England fans should be proud that we have some diversity in our team and that our best players can come from any background.  They shouldn’t be blaming them when things go wrong like these idiotic tweeters (twitterers?) have done.  On the flip side of these racist tweets, however, were users that were outing these racists and reporting them to the Metropolitan Police Twitter account, which was encouraging to see.  As well as the tweets posted here, many more racist tweets can be found on Twitter relating to the football, but many have already been cautiously deleted.

Hopefully, the aftermath of the tournament will at least result on greater emphasis on tackling racism in football, which can, in turn, help tackle racism in wider society.  It’s clear to see, though, that the problem is not just isolated to Polish and Ukrainian fans, but is apparent with a minority of English fans as well.