As one of the, many, unfortunate England football fans, I, along with millions of others, agonisingly watched Hodgson’s team get knocked out of Euro 2012 last night, on penalties.  On seeing Ashley Young rattle the crossbar with his attempt, and seeing Ashley Cole’s feeble shot saved by Buffon; my initial thoughts were of despair for the team and sympathy for the two players.  This, however, was not the case for a number of other England fans.

In the midst of the football-related trends on Twitter, were numerous posts attributing England’s defeat to ethnicity and skin colour.  During a tournament that has been marred with accusations of racism from the Polish and Ukrainian football fans as highlighted in BBC Panorama’s documentary ‘Euro 2012: Stadiums of Hate’, these tweets have shown that racism is still a very real, and equally unnerving issue here in Britain too.  Such tweets referred to Young and Cole as ‘niggers’ and ‘monkeys’ along with claims that ‘England doesn’t need black penalty takers’.

It will be interesting to see if the media shine as much of a light on it, but I’m doubtful that they will.  It certainly reinforces the idea that FIFA’s anti-racism campaign is still nothing more than just a slogan of ‘Unite Against Racism’ or ‘Let’s Kick Racism Out Of Football’.  Some of these issues are rooted deep in areas of society, and FIFA and the English Football Association have got lots of room for improvement in stepping up these campaigns.

England fans should be proud that we have some diversity in our team and that our best players can come from any background.  They shouldn’t be blaming them when things go wrong like these idiotic tweeters (twitterers?) have done.  On the flip side of these racist tweets, however, were users that were outing these racists and reporting them to the Metropolitan Police Twitter account, which was encouraging to see.  As well as the tweets posted here, many more racist tweets can be found on Twitter relating to the football, but many have already been cautiously deleted.

Hopefully, the aftermath of the tournament will at least result on greater emphasis on tackling racism in football, which can, in turn, help tackle racism in wider society.  It’s clear to see, though, that the problem is not just isolated to Polish and Ukrainian fans, but is apparent with a minority of English fans as well.

So – here’s a rundown of how I voted on motions at Guild Council on 13/6/2012 on behalf of BEMA.
Given that it was the last Council of the year, it was extra long on the agenda.
(This report will reflect that.)

END_OF_DOCUMENT_TOKEN_TO_BE_REPLACED

Imagine my surprise when walking to Tesco this weekend, I saw a group of students sat on the pavement outside of Kebabland that had seemed to have “blacked up”.  I am not quite sure how to phrase it, but they had ‘made up’ their faces to be of a dark colour, and were wearing black afro wigs.  Safe to say, I walked past confused at their, surely impossible, stupidity.  However, on the way back I passed them again by Rooster House and their ignorance of socially acceptable behaviour was confirmed.  I regret not taking a photo, although, in my defence, I was a little shocked and confused.  It was about quarter to nine in the evening, so whether or not they were preparing for a night out, I can’t be sure.  I could have sworn that one of them gave me an awkward glance though. 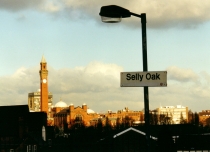 But at a University with as diverse a population as ours, do students seriously think that “blacking up” is an acceptable or amusing form of fancy dress?  It seems like there are some that do not know the difference between fancy dress and offensive mockery.  This isn’t just a problem that these particular idiotic students have though, not too long ago, the third in line to the throne of the British Monarchy, Prince Harry, thought it was acceptable to go out partying dressed as a Nazi.  I’m all for fancy dress parties, I mean you could go dressed up as anyone from Superman to the Tooth Fairy and not many people would bat an eyelid.  But “blacking up” your face and wearing afro wigs?  That’s just incredibly racist.

So, what is all this “blacking up” malarchy and where is the line drawn?  “Blacking up” or “Blackface” was used in theatrical performances in America from the 1830s until the Civil Rights Movement of the 1960s.  It was used to display caricatured stereotypes of black people, and was also popular in British culture being used until as late as 1981 with ‘The Black and White Minstrel Show’.  More recently, popular American actor and television host Ashton Kutcher caused controversy when he used make-up to appear as a fictional Indian film director to advertise ‘Popchips’.  The advertise was later taken off-air as a result of widespread anger due to it’s racial stereotyping.

Is it ever acceptable,  then, to make-up your face to appear like someone of a different ethnicity?  Ashton Kutcher acting out a mocking, stereotype of an Indian man is clearly unacceptable.  As is the case with Prince Harry partying as a Nazi, and the same can be said with those students in Selly Oak “blacking up” and wearing afros.  I remember, years ago, watching the biographical film ‘Gandhi’ in which Ben Kingsley played the lead role.  It was an excellent film and was awarded no less than eight Academy awards including awards for ‘Best Picture’ and ‘Best Actor in a Leading Role’.  In the film, Kingsley wears dark make-up so that his skin could appear brown like Gandhi’s.  The difference here between Kingsley’s portrayal, and those of Ashton Kutcher’s Popchips advertise, and those of the minstrel caricatures, is that Kingsley was not portraying a mocking stereotype but was fulfilling his profession as a fine actor.  However, it is likely that this was passed without criticism as Kingsley, despite being an English actor, is in fact half English, half Indian-Kenyan.  His original name was also Krishna Pandit Bhanji.  So for him to portray an Indian is, arguably, much more acceptable than Kutcher’s portrayal.

“Blacking up” and wearing an afro as a form of fancy dress is completely unacceptable though.  Like with Kutcher’s mocking portrayal, and the minstrel caricatures, it is merely offensive and perpetuating a racist stereotype.  Students often choose to come to our University and to come to Birmingham due to it’s diverse population and the presumption that diverse backgrounds are appreciated and that racism will be non-existent.  This is, evidently, not the case though, even more so as a result of certain questionable comments by students on recent Facebook threads.  It should, however, serve as a reminder to how important our work with BEMA is to combatting racism and educating students.  In the two years, so far, that I’ve been a student here, I have not seen, or heard about, much that has been done by the Guild to tackle racism, but hopefully we can change that in the near future so that we can try and prevent such ridiculous actions such as those I witnessed this weekend.

For most people, last bank holiday weekend would have entailed of a celebratory Jubilee street party, plenty of Pimms, and reams of bunting. For me, it was an awkward and uncomfortable one which I could not wait to see the back of. Thankfully, karma poured down pretty much all weekend, which made me feel less guilty about not doing anything. 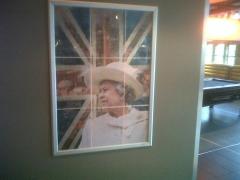 Unfortunately for those on campus, the choice was not so free. The VP of Democracy and Resources felt the need to promote and endorse nationalist and royalist sentiments, by draping the university in bunting and Jubilee regalia which for many represent the legacy of the Empire . All around the world, whether it is Palestine, Northern Ireland, Zimbabwe, India or Pakistan, its taste is still bitter in the mouths of the people. It is certainly not something a multi-cultural, internationalist institution like the Guild of Students should be celebrating.

I am not ashamed to say that I feel a certain level of discomfort at the idea of waving a Union Jack, and indeed even more so at the sight of others (particularly People of Colour) doing so. After all, it was not hijacked by far-right groups and football hooligans for no reason, neither could they have so successfully reappropriated and rebranded it if it did not conflate with their ideology in the first place. To myself and others in Iraq, Afghanistan and Kenya all it stands for is genocide and white-supremacy. 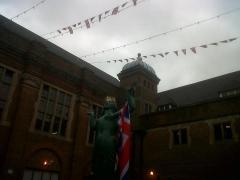 It is not only the Union Jack people will be jingoistically waving that represents white-supremacy, but the very premise of the role of head of state. I for one can never assume this role and neither can any other Person of Colour. Considering the head of state is supposed to represent its people, how can black people ever feel proud of being British when we can never reach this “pinnacle”? The most educated, moral and decent asian guy will never be able to assume this role, instead Prince Harry who used the term Paki to describe a member of his platoon could represent Britain. 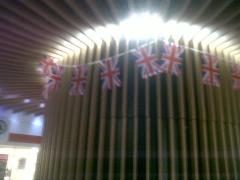 Our acceptance of the Jubilee celebrations do not only legitimise the Queen’s role as the head of state, but also others like the King of Bahrain who recently took a day off from his murderous regime to luncheon with Queen at her special jubilee meal. The other despots who she broke bread with included Prince Mohammed Bin Nawaf Bin Abdulaziz Al Saud of Saudi Arabia and Mswati III, the King of Swaziland, who has imprisoned the president of the Swaziland Union of Students.

The recent Macpherson inquiry, demonstrated how entrenched institutionalised racism is in this country. The Guild needs to be an organisation that can overcome this sort of racism, but by covering itself with regalia of institutional racism, how can it ever expect to engage black students or those who have suffered racism. “Black apathy” in the Guild is a direct result of it being overwhelming dominated by privileged white men who make insensitive out of touch decisions like this one, thereby alienating us. So unless the Guild executives check their privileges and change how the Guild appears to black students, it will never progress.